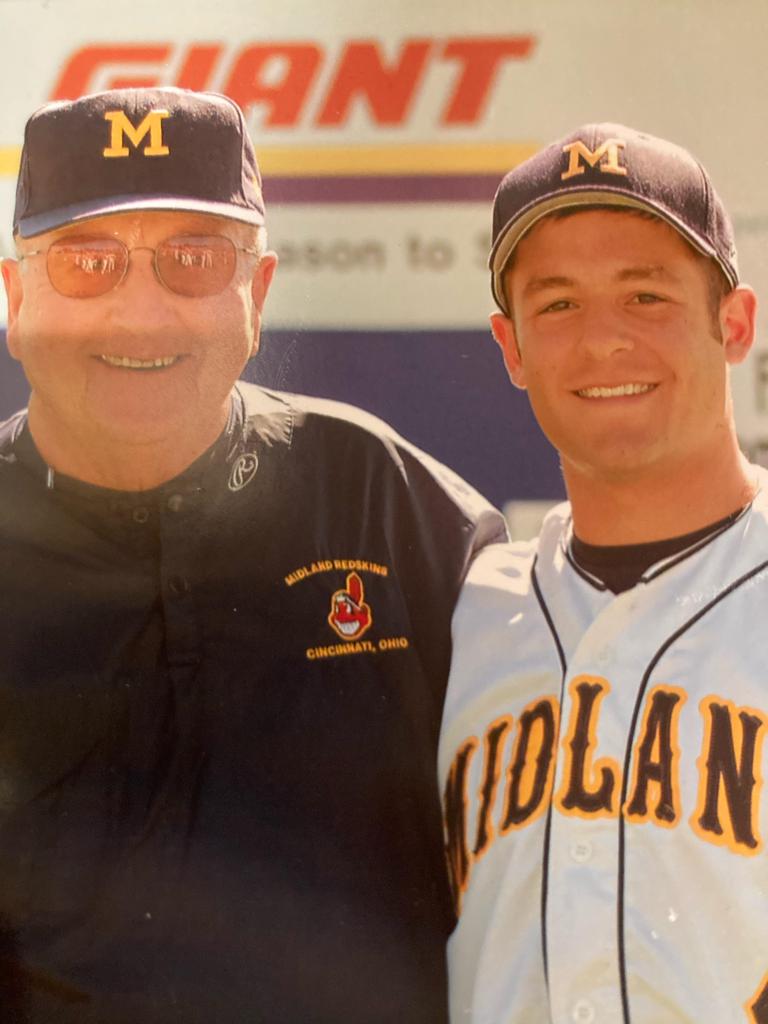 Catching up with Dr. Jon Edgington

A countless number of young men have come through the Midland Baseball Program./. Some have gone to the MLB and have been all-stars, others have stayed in baseball, whether it be playing, coaching or instructing, but Jon Edgington took a different route; he’s now in the medical profession. Edgington played on the Redskins from 2007 to 2008, and he was able to sit down and talk about his experience as a Midland player and the type of impact it still has on him to this day.

Edgington is a Cincinnati guy through-and-through playing high school baseball at Wyoming. Along with baseball, he also played basketball. “I played basketball, I had a passion for basketball but long-term saw myself as more of a baseball player. I also wanted to do well in school, and that was a challenge I also liked,” Edgington said.

Edgington was also coached by ‘Doc’ Wieland at Wyoming, a former Midland coach and player. Edgington said of Wieland, “He had a non-traditional way of coaching, being kind of nervous as a freshman never really happened because Doc’s way of making me feel comfortable, giving me some confidence that may not be there, I think it really helped me in my early years at Wyoming.”

Edgington had the opportunity to play along many great players during his time as a Redskin, including Eric Hosmer and Matt Harvey. Edgintgon has fond memories of both, including Harvey who we spent a countless amount of hours not only on the baseball field, but off it as well. “He [Harvey] had a grit and toughness about him. He was a competitor that I loved being around. We would go to the gym and play basketball and he would just demolish people on the basketball court, he had a” no mercy attitude” which I loved. I think Eric Hosmer has to be up there, as far as teammates and people; he was an incredible baseball player,” Edgington said.

Looking back on that team, there is a wide variety of what those young men decided to pursue in life. Harvey and Hosmer are each former all-stars and have spent the entirety of their careers playing in some form of professional baseball. Brad Gschwind, a close friend of Edgington and another former member of that team, decided to pursue a career in coaching and is a former division one college assistant, and is now the Head Baseball Coach at Lakota West High School located in Cincinnati. Edgington is now back in Illinois aiming to become an orthopedic surgeon and has hung up his playing career days. From that team alone, you can see how each of the guys mentioned took a different route and ended up in complete different professions. But this is the reason the Midland program is so special because it allows different people to make life-long relationships that span long outside of baseball, and in this case and many other cases, across the United States and different parts of the country. The sacrifice Edgington has made to give up his playing career to take on a new challenge as an orthopedic surgeon cannot be understated, and its’ another reason why he is such a special alumnus.

An important part of being a Redskin is the people who your surrounded by, none being bigger than the man who helped build the dynasty from scratch and making the Midland Program into what it is today, “Papa” Joe Hayden. Many players were touched by Hayden, not only as baseball players, but as young men, and his impact on Edgington was no different. “I could probably go on for a while [about Papa Joe], but thinking back to when I was young, I remember Papa Joe had a way of pushing you to do better and reach your full potential. I think he was able to see something in you that you didn’t see in yourself,” he said.

“He saw something, maybe not raw talent, but something else that I brought to the team, as far as attitude, and I think from a young age that gave me a lot of confidence and I think I carried that on throughout my life, and off the baseball field. There were a lot of little things he did that I took note of; I remember after every game he would take his hat off and shake the hand of the other coach, and tell them “good game”. It didn’t matter if it was the Bayside Yankees or some weekend Cincinnati team, he treated everybody exactly the same,” Edgington added.

As a Redskin player you create many memories, most of which last a life-time and form relationships that last outside of baseball. Hayden sticks out in a lot of memories from former players and Edgington was able to share some notable memories he had from his time at Midland. “We’d always bring it in and everyone would put their hands in together. You could yell as loud as you wanted and say ‘Skins on three, but he’d give you that look and would always be asking for more, but I really love that memory,” Edgington said.

“Another favorite memory would have to be the Connie Mack [World Series]. It was an unbelievable experience; the people in Farmington [New Mexico], the kind of treatment you get as if you’re a celebrity or a big league player. And then to go through and win the whole thing, I think was unbelievable! And to be able to win a championship, it was pretty cool,” Edgington added.

Countless number of men have come through the program and some have had their lives changed just over one summer with the team. The development of the player, and the person as well, has been a major success for the Midland program. And it has helped prepared the young men outside of the game of baseball once their playing days are over. Edgington is no different, he is now an orthopedic surgeon and he thinks Midland did impact him in a huge way and was able to get him ready for college baseball and for this new challenge later in life. “It opened my eyes to just how hard people work at the game of baseball and the passion people bring for the game of baseball. I think that prepared me well for college. As far as life goes, I think we were all very fortunate to play for the Redskins. There was a lot of good, but there were also times where you had some adversity and I think having that grit and resilience to keep plugging away; medical school, residency, and even where I’m at now, that grit has gotten me through a lot of things,” Edington said.

Edgington finished his tenure with the Midland program logging 3 years, one with the 16u team and two with the Redskins in which he won a National Championship in 2007. Edgington now resides in Illinois with his 3 sons, Austin, Jack, and James and his wife Katelyn, who is a nurse. As far as his best catch goes, Edgington had one simple answer, “marrying my wife Katelyn”. Edgington received his undergraduate at Miami (OH) while playing baseball along the way. Then started medical school at the University of Cincinnati, and went on to do his residency at Chicago University and finished up his fellowship at Northwestern University. His new big league job will be with North Point Orthopedics as an orthopedic surgeon.