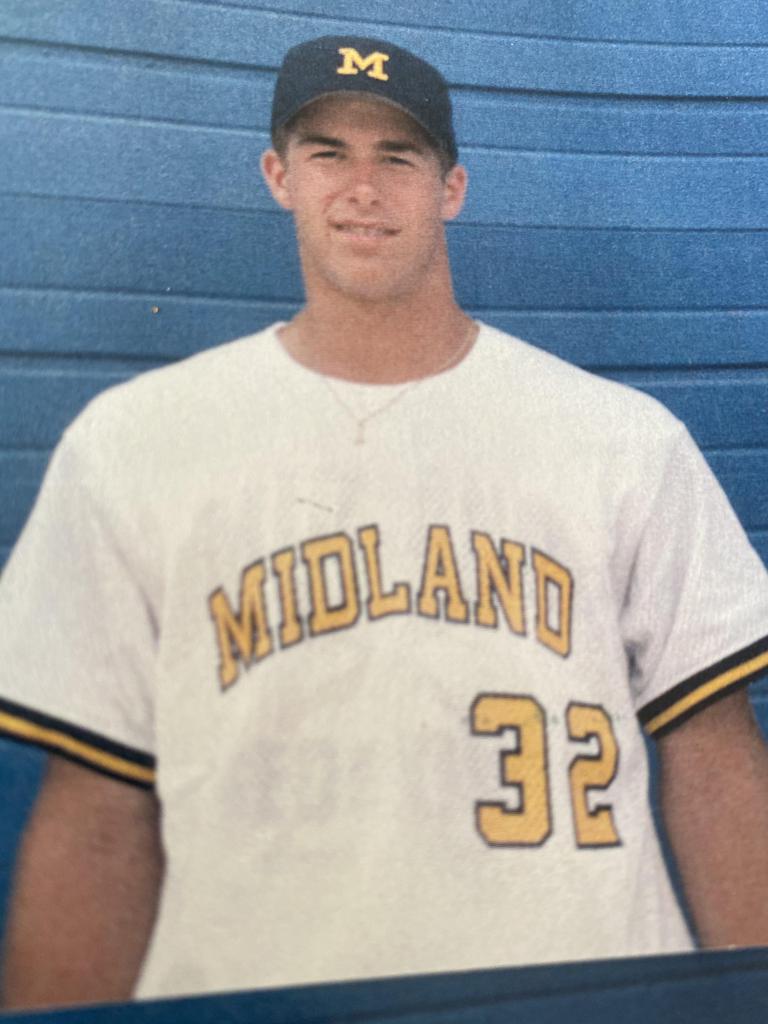 Catching up with Mark Mulder

Not very many people are lucky enough to get the chance to play baseball in the big leagues, but the ones that do are extremely talented and special people. Mark Mulder is no exception to that. Mulder, a 2-time all-star, is one of the very special young men who had the opportunity of playing for the Midland Redskins. Mulder was able to sit down and talk about his time at Midland, as well as his post-career opportunities.

Mulder was born and raised on the south-side of Chicago. Not only was Mulder a talented high school baseball player, he also had great success in golf and basketball too.

“I played a little golf, and a little football, but I only played freshman year so I wouldn’t get hurt for basketball and baseball season. Growing up on the south-side of Chicago, our basketball was tough. I played against guys like Antoine Walker, Donovan McNabb, Melvin Ely, Antwaan Randle El. I played against tons of guys in our conference who played in the NFL and NBA. I loved basketball, but I wasn’t quick enough to guard all of these guys, obviously, but baseball was always my passion,” Mulder said.

“My high school baseball coach was incredible. They had won the state championship during my eighth grade year. My high school had probably a 10-12 year run where we were just awesome. During my junior year, we were ranked third in the nation. From that team my junior year, I think there was six of us who ended up going to play at a division one college,” Mulder added.

“I was always scared of him when I was young, because he was tough. He didn’t put up with anything, he ran our butts off when we didn’t do things the right way, but he knew his stuff, and he knew who to push, and how much to push them. Looking back, he made me who I was, I mean I got much better after high school, but he still was the one who kind of ingrained that work ethic and that drive in me,” Mulder said.

After his Freshman year of college, Mulder was off to Midland to spend the summer with the Redskins. Little did he know what he was getting himself into, and how much that summer would change him for the rest of his baseball career.

“I was kind of just looking forward to getting to go back closer to home and see all of my high school buddies that summer. That spring, my pitching coach at Michigan State, Greg Gunderson, who had played for Midland when he was younger, had told me that he was going to be able to get me on this team, and that they had some unbelievable talent, but I knew nothing of it, I was a very naïve, young Freshman. I really had no idea what to expect, and to be fair I think because I was so young and immature, there was a part of me that was very nervous to go there,” Mulder said.

“I remember pulling in and feeling incredibly nervous that first day. I don’t remember the exact coaches that were there that day, but I remember Coach Hayden was there. Bobby Barnes was another kid on our team, and I remember Coach Hayden took me and Bobby into his Jeep Grand Cherokee and he took us to dinner. I’ll never forget this, I was sitting in the front seat next to Coach Hayden, and he had the air on so cold, I was wearing flip-flops, and by the time we had gotten there, my feet were frozen. But, I think he took us to Montgomery Inn that night, and by the time dinner had ended, I was unbelievably comfortable. Bobby, who had played with the Redskins the year prior, was telling me all about the team and this and that,” Mulder said.

“Coach Hayden, obviously, the cigar never left his mouth and he was so relaxed and just seemed so chill, but he also demanded the best out of us, and I had that high school coach who demanded the same thing. That summer I had with Midland, I have such a deep appreciation for it because I went from a nobody, and I mean a nobody, to starting a game in the Connie Mack World Series throwing 95 MPH. I remember a game at Midland, warming up in the bullpen, and all of these scouts showed up to this game and they’re all standing behind me, watching me warm up, and I thought they were all talking about me, I was so naïve to this whole thing, and to how good I was, and what exactly I was doing,” Mulder said.

A big part of the summer for Mulder wasn’t just becoming better physically, and throwing harder, but it was the mental aspect, and gaining more confidence as the summer went on.

“So that summer, the amount of confidence I was able to gain in myself was enormous. I can’t even really put it into words because that summer I went from feeling like there was so many kids better than me, to feeling like there was nobody better than me. That summer changed everything for me, and it was more mentally than physically, or anything that I did on the field,” Mulder said.

During the Connie Mack World Series, Mulder made all-tournament first team as a first baseman, and in that tournament would go onto face his future long-time teammate, Barry Zito, who he said he had no idea he played.

“I actually did not know that. All the times Barry and I talked about stuff, I can’t believe that’s never even come up. That’s just crazy,” Mulder said laughingly.

As far as Mulder’s professional career goes, he was drafted, and played a large portion of his career for the Oakland A’s. The A’s were known as a small-market team that were doing incredibly different, and odd things with numbers and analytics, to help them keep a relatively cheap, but still very effective and talented ball club. Mulder was asked about the infamous strategy the A’s pulled off, and the things that Billy Beane (A’s General Manager) did, also popularly known from the movie, “Moneyball”.

“To be fair, I didn’t think it much of it. As players, we were not involved in that type of stuff. We didn’t know a lot of that stuff was even going on. We were just going out every day and playing, that we obviously were not involved with. We knew they were trying to come up with different ways to do things because we were a small-market team, but to be fair, it was irrelevant to us. The twenty-five guys on that roster is just who we rolled with, we didn’t let not signing certain guys bother us or get to us because we were just too young and talented to let that get to us,” Mulder said.

From all of his time playing, Mulder has one specific memory that sticks out above all, and he was able to elaborate on that.

“The one that sticks out the most, is after 9/11. After 9/11 happened, I started game one in Yankee stadium, against Roger Clemens, the very first playoff game after 9/11. When I was throwing the first pitch, Alfonso Soriano was the lead-off hitter at that time, and the entire stadium was on their feet. It was at old Yankee Stadium, and you literally felt like the stadium was shaking. To go in and win that game, and to pitch well, was a really cool moment because of everything that had happened,” Mulder said.

Outside of baseball, Mulder has had a major amount of success in other things after he retired. At one time he worked for ESPN, and did a multitude of different television things for them, on top of being one of the top amateur golfers in the country. To say Mulder is a talented man would be an understatement. Mulder finished his big league career with a 4.18 ERA and 103 wins to his name, pitching over a 1,000 big league innings, and finishing with 2 all-star appearances, in 2003 and 2004, respectively. Mulder now resides in Arizona with his 3 kids, Xander, Tatym, and Dax, along with his wife Lindsey.