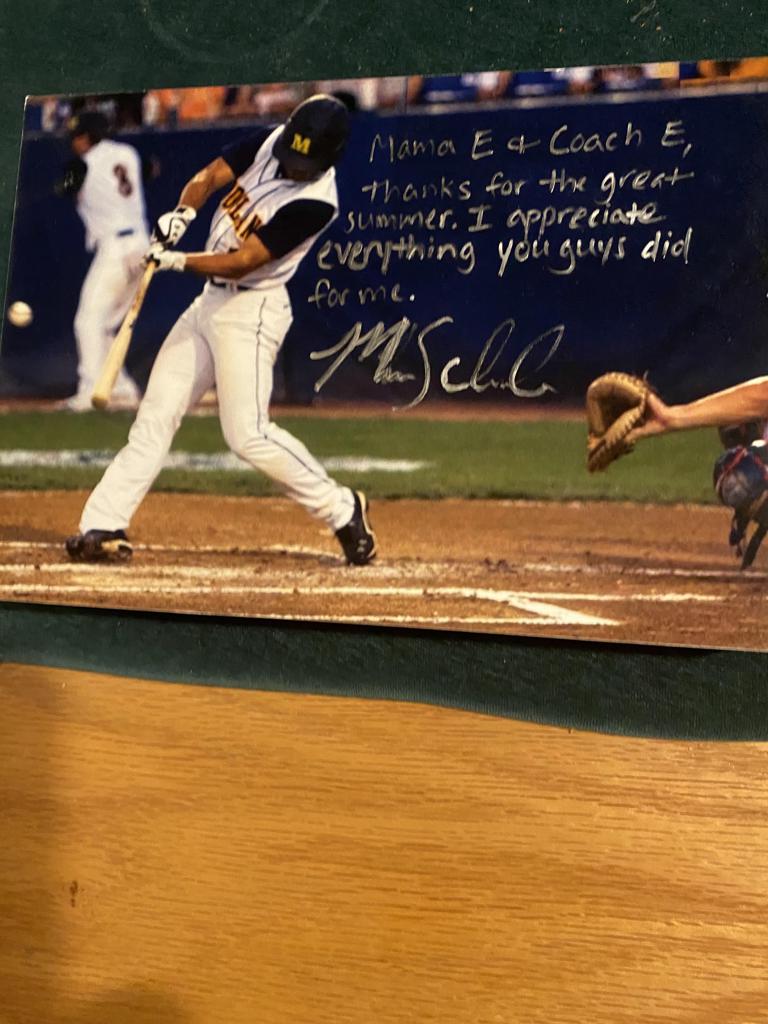 Catching up with Max Schrock

Max Schrock is someone who local people, particularly Reds fans, have come to know very well over the last few months. Schrock is currently in the big leagues with the Cincinnati Reds, most recently endearing himself with Reds fans with his 3-3 performance over a win of the Phillies on Memorial Day. Schrock is one of the many former Redskins to enter his name into a big league boxscore, and he was recently able to take time, and sit down to ‘catch up’ with the Midland program.

Schrock was born and raised in North Carolina, and he was able to discuss his earlier days, and some other things about himself that fans wouldn’t know.

“I went to Cardinal Gibbons High School in Raleigh. I actually grew up playing basketball, my dad was more of a basketball player himself. I wasn’t really too good with that, so once I got to high school, I stopped playing that, and focused on baseball. Other than that, I like to fish, I like to play video games, hangout with friends; I’m pretty much a standard guy, I don’t have too many interesting hobbies,” Schrock said.

Schrock attended the University of South Carolina, and he talked about why he chose that place, and his history, dating back to his high school days, with the Gamecock Baseball program.

“I grew up going to some of their camps, and I was able to meet Coach [Ray] Tanner, and immediately after I met him, I knew he was a guy that I really wanted to play for. I really fell in love with the campus, and the facilities were topnotch, and I really wanted to play in the SEC, so those were some things that ultimately went into my decision to go there,” Schrock said.

Being from North Carolina, Schrock was not really aware of the program until a recommendation from the Dad of a Midland alum, and former big leaguer, Landon Powell. Schrock was also able to open up about his initial reaction to the program itself upon arriving.

“I actually heard about Midland through Landon Powell’s father, who was my legion coach growing up. Obviously, Landon was a former Midland great, as well, and he was the one who originally told me ‘hey man if you get the opportunity to go there, you need to do it, it’s awesome.’ He talked to me about Papa Joe a little bit, and then I believe [former Midland GM] Brian Hiler saw me at a tournament, and called me. I jumped at the opportunity to go checkout the facilities, which were obviously topnotch, and pretty much after that I made the decision to play. Once I was there, immediately I was pretty blown away by the entire experience. The fantastic host families, the facilities, the field, the competition that we played, it was honestly one of the best summers of my life,” Schrock said.

Across every summer in the history of the Midland program, each player is able to make countless amounts of memories that last them a lifetime. Schrock is no different, and he was able to open up about some of his favorite memories from that summer he spent at Midland.

“The Connie Mack World Series as a whole was just an incredible experience. It was something I had never experienced, I believe there were a few thousand people at the first game, when we played the Farmington team, so that was a little eye-opening, and pretty awesome because I had never played in front of that type of crowd before. Really, the entire Farmington experience was probably the highlight of the summer for me,” Schrock said.

Not only did the Midland program have an impact on Schrock as a player on the field, but also off the field as well, which can be said for countless amounts of other young men who have come through the program. A big portion of this is credited to the man who started the program, and built it from the ground up, ‘Papa’ Joe Hayden.

“The thing that sticks out to me the most was that I played for Midland the year before I went to college and Midland in a whole was really run like a college program, so there were no surprises once I did get to college. As well as the fact that I was in top baseball shape, from playing so many games in the summer against good competition. But as far as the other stuff, the leadership I learned while I was out there was to me unmatched, and was a huge piece as well.” Schrock said.

Schrock added of Hayden, ”I mean I can’t say enough about Papa Joe. It was always in the back of my mind like, ‘wow this guy is doing all of this out of the goodness in his heart’, and he was just a true baseball fan, and I think it made you respect the game a little bit more, just knowing the passion that he had, everyone on the team really respected him, and we all wanted to play really well for him, and win the Connie Mack World Series for him. The impact he had on me that summer was incredible,” Schrock said.

Max is married to his wife, Sarah, and his parents are Bill and Julie Schrock. Schrock not only continues to contribute and stay connected to the Midland program, but he also has made big contributions to the hometown club, the Cincinnati Reds. Schrock is just one of the latest Redskins to make his impact in professional baseball, and another one of the many young men who left a positive mark on the Midland program.